Per the document available suggests that President Akufo-Addo has banned the use of sirens by some of his appointees.
The president says anyone who violates the law on sirens will be prosecuted.

The ban affects ministers and their deputies.

The nuisance associated with government officials disturbing road users with their sirens seems to have gotten the attention of President Akufo-Addo who has directed some appointees to stop using sirens.

In a letter shared by GhOne, the presidency placed a ban on the use of siren vehicles by Ministers, deputy ministers and Metropolitan, Municipal and District Chief Executives (MMDCEs).

The ban also affects Chief Executive Officers of public agencies and some staff of the presidency.

In the statement, President Akufo-Addo warned his appointees to adhere to the rules on use of sirens or risk prosecution.

“For the avoidance of doubt, the said ban on the use of sirens covers Ministers, deputy ministers and Metropolitan, Municipal and District Chief Executives (MMDCES), CEO’s of government agencies and some staff of the presidency.”

The abuse of sirens by government officials and security personnel has long been a concern for most road users who have to endure the roguish acts of such illegal siren use.

READ:  I Sold My V!rginity To A Fetish Priest, Now My V@gina Is ‘Rotten’ -Beautiful Lady Cries And Begs For Help

In 2017, the police issued a statement announcing a crackdown on the illegal use of sirens.

“Regulation 74(2) of L.I. 2180 provides that … a person shall not fit on a motor vehicle a warning appliance other than a type approved by the Licensing Authority (DVLA). “The law is therefore clear on who can install and use motor vehicle warning appliances including bells and sirens in their vehicles,” a statement issued by the police and signed by Supt. Cephas Arthur, the then Director of Public Affairs, said.

List of entities permitted to install and use sirens 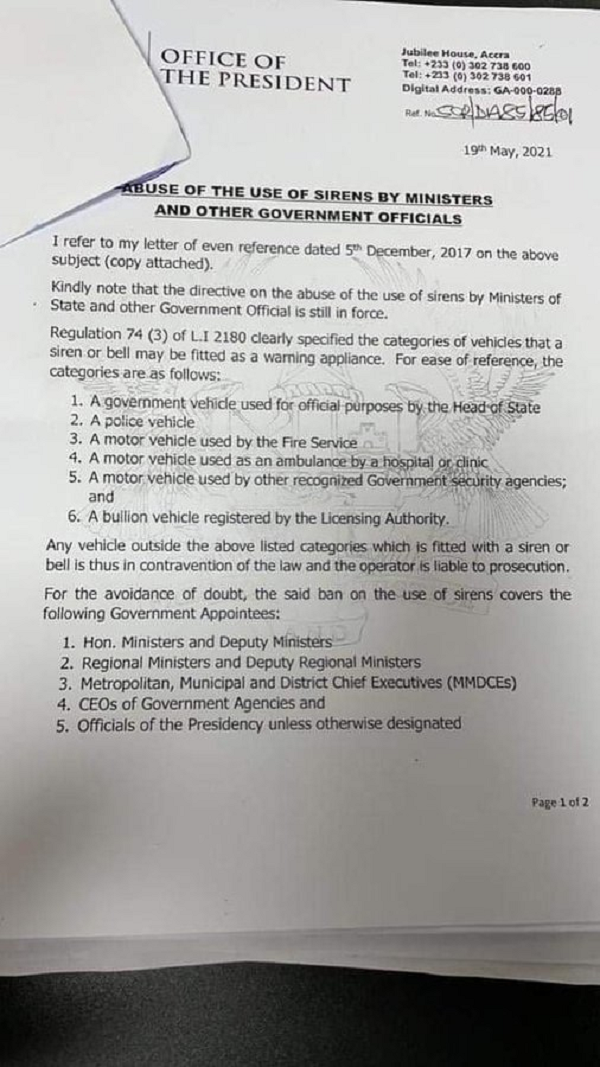