Spread the love
The former Deputy General Secretary for the biggest opposition party in Ghana, the New Democratic Congress (NDC), Mr. Samuel Koku Anyidoho has took to his Twitter handle to warn Sammy Gyamfi and Samuel Ofosu Ampofo in the NDC.

Mr. Samuel Koku Anyidoho was recently suspended from from the NDC party for allegedly supporting the ruling party, the New Patriotic Party (NPP) on his recent comments on national issues.

After his suspension, the Chairman for NDC, Hon. Samuel Ofosu Ampofo and the Communication Officer, Sammy Gyamfi have publicly expressed their excitement for his suspension. The Communication Officer of NDC, Lawyer Sammy Gyamfi has recently attacked parliament especially his part (NDC) members including the current Speaker of Parliament, Rt. Hon. Alban Bagbin for allegedly taken huge sums of money for the approval of Nana As do’s appointed Ministers.

The above allegation made the Speaker of Parliament to react angrily and warned Sammy Gyamfi to stay off parliamentary issues.

Well, Koku Anyidoho in his recent post on Twitter has commended the Speaker of Parliament for his bold reaction and therefore blamed the Chairman of the NDC Hon. Samuel Ofosu Ampofo for the recent disrespecting attitude of Sammy Gyamfi on his lack of taken control as a national Chairman of NDC. 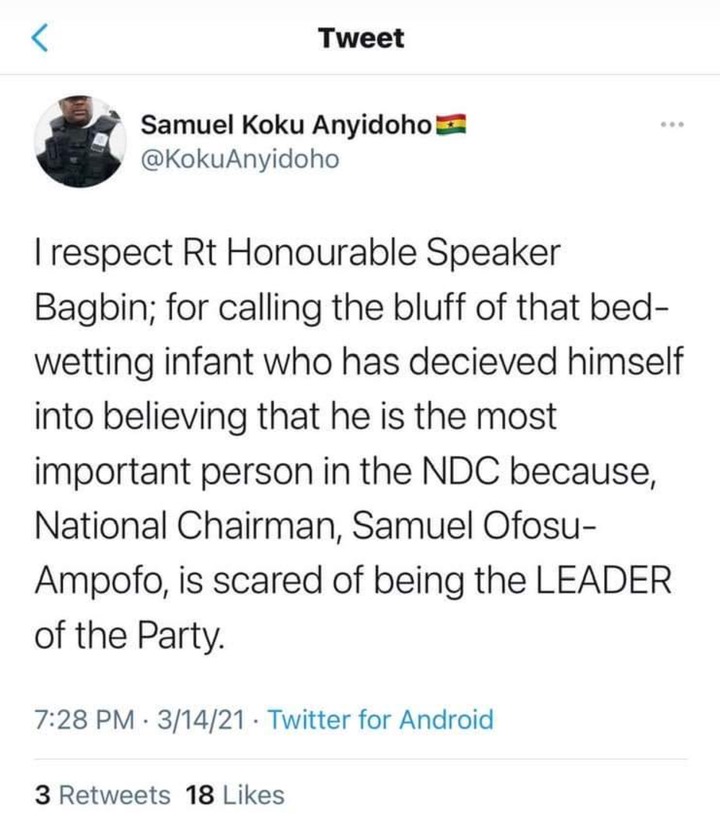