The Junior Doctors’ Association, Ghana has reacted to an alleged misunderstanding between a doctor and a nurse at the Manhyia District Hospital.

On Tuesday, November 29, 2022, GhanaWeb reported that the Ashanti Regional Director for the National Service Secretariat, Mr. Alex Poku Mensah, had been captured on tape verbally attacking a staff nurse at the Manhyia District Hospital.

In the audio recording of the incident, Mr. Alex Poku Mensah was heard hurling insults and threats at the nurse for allegedly intimidating his daughter, who is a house officer at the hospital.

According to multiple reports, the said nurse is said to have called Mr Poku Mensah’s daughter on phone to inform her about the need for her to return to the facility to update a patient’s record on the hospital’s patient management system.

But reacting to this, the Junior Doctors’ Association says that falsehood is being peddled against the said doctor, which seemingly seeks to bring the professional competence of same under disrepute.

In a press statement, the association explained that claims that the doctor gave a wrong prescription to the child were untrue.

They added that the doctor did not review any child on that day on the surgical ward like is being suggested but rather correctly prescribed an intravenous fluid for a patient.

However due to the unavailability of the intravenous fluid prescribed, the nurse called the doctor to delete it from the system to avoid extra billing.

“The attention of the Junior Doctors Association has been drawn to an alleged misunderstanding between a doctor and a nurse at the Manhyia District hospital, which occurred on Sunday, 27 of November, 2022.

“While we do not condone the actions of the father, it is imperative to set the records straight on the falsehood being peddled to bring the professional competence of the doctor into disrepute.

“The non-availability of the Intravenous fluid prescribed prompted the nurse to call the doctor to delete it from the system to avoid extra billing.

“The information on social media, radio and TV stations about an alleged wrong prescription is untrue, according to the hospital management and records available,” the statement indicated

READ:  Police begin Investigation Into The Drowning Of A Police Corporal In The Western North Region

The regional NSS director, in the company of his daughter, reportedly stormed the hospital to accuse the said nurse after the nurse reportedly called Mr Poku Mensah’s daughter on phone to inform her about the need for her to return to the facility to update a patient’s record on the hospital’s patient management system.

Mr. Poku Mensah, in a heated exchange with the nurse, is heard verbally attacking her while touting his position and threatening to transfer the nurse from the hospital.

“If she does anything, come and inform me; I will use my power to ensure she is removed from here. I’ve introduced myself; I am the National Service Regional Director,” Mr. Opoku is heard shouting at the nurse.

The nurse in return is heard saying, “do you also know me? Do you know my father?” To which a furious Mr. Opoku retorted, saying, “Fool, does the work belong to your father?”

Meanwhile, the Ghana Registered Nurses and Midwives Association GRNMA has called for the sacking of Mr Alex Poku from office.

According to the association, the conduct of the Regional NSS Director at the Manhyia Hospital makes him unfit to occupy the position. 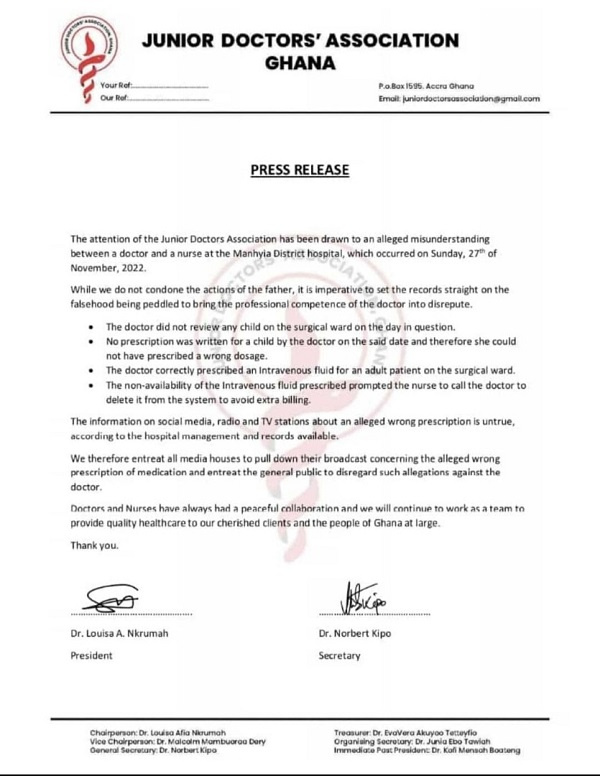