Over GHC600,000 has been paid as unearned salaries to some 63 persons of various institutions under the Ministry of Education

It has emerged that over six hundred thousand Ghana Cedis was paid to the accounts of 63 staff of various institutions under the Ministry of Education, the 2020 Auditor-General report has revealed.

The report, released in June gives a breakdown of how funds disbursed to the various government institutions and ministries have been used.

Divided into two parts, the Auditor-General projects the findings and recommendations in the report.

According to the report, the 63 workers who seemed to no longer be with the respective institutions were still being allocated salaries for no apparent work done which totalled GH¢601,282.10.

The offices responsible for these actions are located in seven regions in the country namely Greater Accra, Ashanti, Eastern, Oti, Ahafo, Bono and Upper East.

Below is the report as submitted by the Auditor-General and discussed on GhanaWeb’s The Lowdown:

READ:  This Is What Abu Jinapor Said About The Salaga South Seat - See Details

Findings: The auditor-general’s review of the payroll administration of the Ministry of Education showed lack of responsiveness of some Heads in ensuring the deletion of names of separated staff from the payroll.

63 staff who separated from their respective institutions were paid unearned salaries amounting to GH¢601,282.10 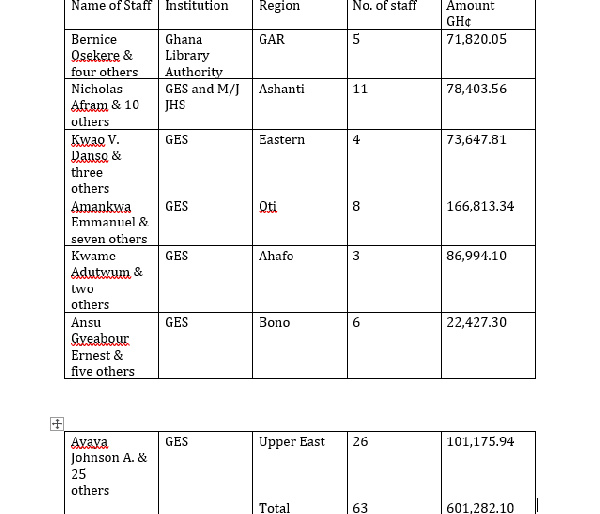 Recommendation: The heads of these offices are to recover the total unearned salaries of GH¢601,282.10 from the beneficiaries.

Failure to do that means the amount will be recovered from the Heads, Institutions and their validators.