The Electoral Commission on Friday, February 12, 2021, conducted elections for new regional representatives to the Council of State.

The exercise, enshrined in Paragraph (C) of Clause 2 of Article 89 of the 1992 constitution resulted in 102 candidates from 16 regions filing to contest the election which was held at all regional capitals across the country.

There were interesting turnouts in the results after polls were collated.

A high point of the exercise included the 100 percent endorsement of the former Member of Parliament for Ningo-Prampram, Enoch Teye Mensah, an NDC candidate who went against six other candidates for the Greater Accra regional representation of the Council.

Abdul Rashid-Mohammed had only one vote.

There was a tie in the results from Western Region, and hence the elections will be re-run, while Bono East couldn’t take place due to an injunction.
Below is the list of elected persons to represent Ghana’s 16 regions for the Council of State: 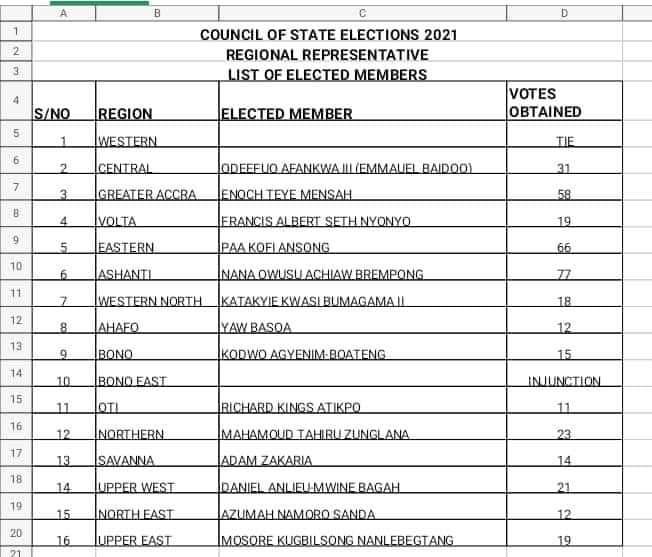 Function of the Council of State

Members of the Ghana Council of State as according to the 1992 constitution have a mandate to advise the president on national issues and governance.

The president of the National House of Chiefs is also part of the body together with the elected representatives of each region of Ghana.